It’s release week! The September update has lots of great content and improvements in it.

As you can see from the trailer above, New Amazon has received a visual update to bring it inline with the other levels. This includes a few gameplay changes that affect the ‘known’ paths around the level, so getting a new feel for it should be fun and interesting.

Overall the lighting was improved, performance was improved, and render distances were increased. There is a more realistic amount of ground vegetation as well.

Building upon Augusts command mode update, there are a few quality of life improvements.

Issuing an order directly to a target will attach the order to that target. This can be used to get AI to follow you with a defend order:

Or have the AI continue to pursue an enemy with an attack order:

Small additional improvements include switching the order type by clicking the order icons in the legend, a reduction in the glaring whiteness of the uplink area, and many overlapping UI issues have been resolved.

Also, Siege base information will be show on the map for teams that have a CommSys equipped. 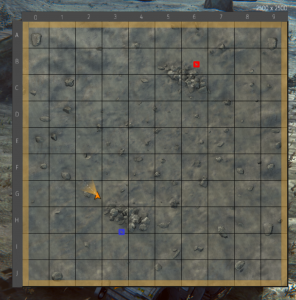 With this update we can finally put this thread to rest!

There are some core balance changes in this update.

Through looking at the Wolf legs, they ran into an interesting situation in which they were very well balanced among the parts on paper, but held a continuing domination of many roles in practice. The Health reduction puts them much more in line with similar speed legs once the smaller hitbox is considered. The armor reduction also helps bring them in line by exposing them to splash damage as a greater weakness.

The energy usage increase is a bit more of a targeted change to increase the build diversity and secondary concerns when using these legs. They are much more vulnerable to generator damage, allowing them to be slowed down in a fight.

These changes, while complicated, are more transitional than a buff or a nerf. The primary problem with the CHAGN-3 was that it again, was fairly balanced on paper but in practice had a few kinks that allowed it to become a dominating part. The CHAGN-3 falls very much into the ‘terror’ weapon category, along with flamers, saws, and spikes. The big difference was the distance allowed with the CHAGN-3. This was some what addressed by reducing the zoom level on the weapon, making long range shots slightly more difficult but without affecting the range.

The hitpoints and armor reductions allow players under fire from a CHAGN-3 (or more likely multiple of them) to have a chance to react and remove the weapon from the battle. At 662 hitpoints, it would require concentrated fire, or a fully connected alpha strike from cannons or snipers to take it out, but that option is now available. To help with this as an option, the impact force of the CHAGN rounds was reduced to 0, as to not affect the enemies aim.

The energy, heat, and heat damage threshold are minor changes that will not have a large impact on the day to day operation of the weapon. The Heat Threshold was artificially high before do to the firing heat. The new values will make the weapon react the same to heat damage if the weapon is firing or not. Before, the weapon had very high heat tolerance when not firing and very low when firing.

We have many other bug fixes and minor updates that have gone into the build to increase performance, stability, or quality of life.

The two most notable can be seen here: 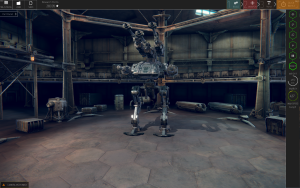 The Garage (and by extension main menu and pre-game lobby) have received a small lighting update and performance pass. In general, we are experiencing a 100% increase in FPS in the garage, so from 60 FPS to 120 FPS. This should help a lot when building your MAV.

Also seen in the screen shot is our new MAV shader, which makes better use of the PBR lighting conditions and reflections. This should make the metal seem more like metal and the camo colors be a bit more vibrant.

Overall we hope you enjoy this months release, which will be Live Friday September 14th. See you on the battlefield!