So after much debate we have a some what final grasp on the general art direction we want to go with. The first reaction was to go with the traditional hyper-real, washed out, dirty look that seems to be so popular these days. While that very well could have worked out, we didn’t feel it was the best fit for us for quite a few reasons. M.A.V. is a game about customizing and we felt having such a limited art direction was inherently limiting the design and customization options we would be able to offer the players. We wanted something that was still visibly appealing, yet still open ended enough to allow player expression. 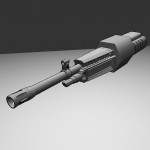 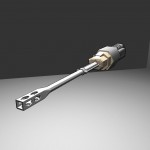 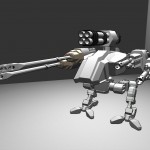 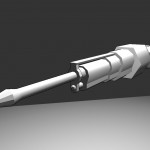 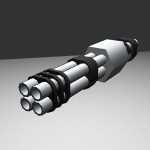 Here are some screen grabs of the general direction we are headed. We liked how the outlining brings out some of the smaller details while not being to distracting. We feel the small touch of outlining and the simplified lighting add just enough ‘fun’ that any design or pattern a player comes up with will still feel like it belongs in the world.

These images show untextured models mainly because the color and patterns will be completely editable by the players. We wanted something we could look at in it’s raw form and be happy with. These parts are the current parts we are using to test out the mech builder, something we will be showing soon (The mech in the screen shot was built using the builder). I want to get a tad more UI polish in before showing it.