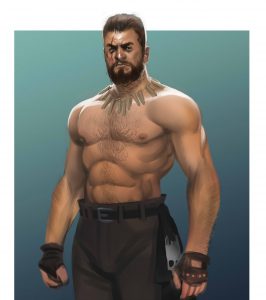 If demonstrations could change anything they would have made them illegal.

The people gathering in the streets of that city cried and screamed, and pumped their firsts into the air, thinking such a show would actually change the minds of those overseeing their lives back on Earth.

But they wouldn’t care. They didn’t care for the masses that starved under their watch back home, and certainly would not worry for the poor sobs stranded in an alien world millions of kilometers away.

And why would they care? What could those disenfranchised workers really do? Kill soldiers? As if the overseers cared! They had troops to spare. They could always send more and more until Europa was nothing but a mass grave. Anything would do, as long as they gained their share in the end.

Thus, they needed to be forced to pay attention. To do that, the protesters needed to become something else. Something more.

The rebel moved the joystick to remotely tilt the small camera his associates had hidden in a corner of the main street. Through the pop-up screen on the top of his HUD he saw the three loyalist MAVs blocking the exits on the right side. The angular war machines stood vigilant, their pilots observing the screaming crowd as it moved down the street. A few demonstrators even had buggies and stood over their roofs, pointing fingers at the loyalists.

His informants told him there were a few more MAVs on the other side of the town, and a pair of lighter scout units patrolling the surrounding hills. It was quite the hefty presence, but they wouldn’t be really expecting what was about to happen. After all, those pilots were there just to control the crowd, to show them the true power of the government those people were complaining about.

Well, time to show the miners what that power meant.

While the thought formed in the rebel’s mind, the crowd kept moving, encircling the main administrative buildings on the northern side of the city. Nearby there was a hangar with the main gates wide open, revealing the few MMVs stored there. They are all empty but one. And that last machine came alive as the rebel pilot gripped the control sticks.

“White light,” he said to his mike. The code word would be heard by his associates, and maybe even by the military personnel, but that made little difference at the time.

If everything was going as planned his allies should be taking position among the crowd and the buildings. A few potshots would make the whole thing that much more realistic, after all.

The rebel pilot made the MMV exit the hangar. He had purposely chosen a unit with humanoid legs, which would allow him to move easier among the buildings. He turned to an alley as soon as he cleared the hangar, out of the MAVs’ line of view.

Now the patrolling governmental units were starting to react, shaken out of their boredom by the solitary MMV.

The rebel saw a machine with digitigrade legs moving backwards from behind some apartment blocks. It turned the torso to look at him at the same time the rebel turned down the mounting in the right side of his MMV. Large metal slabs that looked like industrial equipment slid down and crashed in the street, revealing a pair of assault rifles. Relieved of that weight and with his intentions now clear, the rebel leaped forward in full throttle, his feet punching holes in the road as his legs devoured the distance. 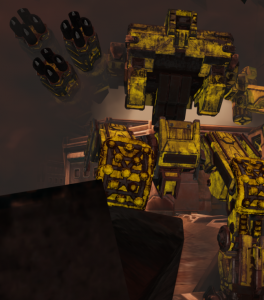 Reacting out of instinct, the governmental pilot fired with his machineguns. In his haste he didn’t even aim and the shells flew too high, managing just a few glancing shots at the top of the modified MMV.

The rebel was now on top of him. He shoved the MAV’s rotating barrels out of the way with his right shoulder and brought the mining spikes on his left side right over the cockpit. The other pilot froze, certainly contemplating his fate. Then the spikes came down with a force that shook the MAV. They didn’t penetrate, so the rebel brought down the spikes once more. This time they went through, the armored bars ripping and twisting the innards of the cockpit into an unrecognizable heap.

With its very core now destroyed the MAV collapsed like a ragdoll.

The rebel turned to the alley from which that machine had come from. It led directly to the street where the main demonstration was taking place. And right across it was another MAV. It tilted the torso to face him and then the rocket pods on its shoulders burst in flame and smoke as the warheads came alive.

The alley and the buildings around it were peppered with explosions, dust and masonry cascading over the crowd in the open. The rebel felt his machine shake, but the damage remained minimal, the environment around having bared the worst of the punishment. As some of the smoke settled he responded with his battle rifles, managing to put a few rounds around the enemy’s torso. The MAV reeled back, trying to get into a more favorable position.

Locked between the two dueling titans, the civilians panicked and start running in every direction. Confusion spread across the city and even across the military pilots. The rebel’s allies would have fired a few shots at the MAVs by now, before taking their leave and allowing the events to unfold.

Even if some of them were caught in the chaos that would not matter. They were true believers, and were there to show the true face of the Earth’s governments, even if it costed them their lives.

Through his small hidden camera the rebel pilot saw sections of the main street getting covered in burning napalm. The people who escaped the devastation caused by the flamethrower ran to cower in the alleys and inside the buildings.

One heartbeat later tracer rounds zipped through the crowd, adding their own destructive power to the bloodbath. It only took a couple minutes to fill the main street with rubble and bodies. In their attempts to open the way to reach their comrades, those pilots had made everything worse.

The rebel pilot was already running away when that happened. While the violence escalated behind him, he went directly into the entrance to an underground hangar near the edge of the city. With his rifles he made the entrance collapse, and then abandoned the MMV.

Later, he would join his comrades and hide while the aftermath unfolded. The hapless protesters would achieve the change that they intended, but not through the means they had expected. Truth is, symbols are more powerful than any speech. Or so did the rebel pilot believe.

Redcoat had opened the door to the events that would change humanity.