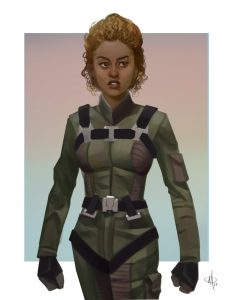 This is Alizé. Your past self, anyway. I don’t really know why I am recording this. It has been a long time since I felt the need to record my thoughts.

Maybe it was that pilot. Seeing him standing over his broken machine, glaring at me, sent shivers down my spine. But I’m getting ahead of myself. I tend to do that. Maybe that’s why I’m all the way here, in the depths of the Solar System…

Well, when I took the ship to Europa I was told that my talents would be useful on this new frontier. They needed physicians and surgeons for the miner colonies, and I needed to get out of Earth, escape that hopelessness. So I came here, and found out that things were not what I had imagined.

They advertised this place as an adventure for the pioneers, a new realm where one could get rich with enough work, where opportunities were aplenty, and one could carve her own place in the universe.

I did work as a physician, in a damned clinic, treating colds and doing check-ups. I do understand the importance of avoid epidemics in the enclosed spaces of a habitat, but I am a surgeon! I was wasting my talents away. Letting them rot in that damned clinic.

Yet, all the surgeon positions were already full, and no one seemed to care to give me the opportunity to at least practice once or twice. That infuriated me. What I didn’t realize was that they were protecting their posts in a place that was already boiling under the surface.

That only hit me when the new quotas started to come in, along with the troops, and the new administrators. Someone come to me one day and asked if I had steady hands. I said “yes” and they trained me to operate an MMV. Me, turned into a miner…

I guess that by then the possibility of people rebelling did cross my mind. And rebel people did.

The mere thought makes me shiver, and brings a bad taste to my mouth. But I ended up going with the flow. I piloted the MMV because I needed the money, and now I pilot the MAV because… because I have something to defend.

I’ve been feeling disappointment ever since I got here. Yet, I kept going with it, as if sleepwalking. I think I still cannot believe on how everything went so wrong.

And then there’s Fyodor, who sees himself as some sort of tactical mastermind. He’s the leader of our small assembly of rebels. Because that’s what we are. Miners and others, normal people drawn into this nightmare, rebelling against the oppressors back on Earth.

Last night Fyodor called me and the other pilots. He had a plan: a supply raid to a governmental outpost. There were only a few enemy MAVs garrisoning the place, and we could put them out of action and grab a good haul of ammo and supplies before any reinforcements could get there.

Of course, Kirito had his doubts. He could not believe things would be so easy. How could he, really? We’d lost two MAVs and one pilot, Giorgio, in the previous raid.

Damn… I miss Giorgio. I should talk about him later. He was funny.

Back to where I was… Fyodor replied that he knew the terrain for this one. Everything would be fine, and if something went wrong, I would be there to cover their backs. I swear he puts too much faith on me.

I groaned, but he seemed certain his plan would work. Although still unconvinced, Kirito accepted the plan, as did the others. Of course, the raid went south almost as soon as we reached the outpost. How could it not?

We attacked with our two MAVs and three MMVs. They had three MAVs. Two of our MMVs went down in a couple minutes, and the others started moving all over the place, firing wildly to force the enemy back through sheer volume of fire. As always, I stood on a nearby hill, with only my turret and my guns exposed. One of the enemy MAVs, already damaged, positioned itself on a hillside. He gave me the better shot, and I took it.

Facing MAVs is an odd thing. They are big and imposing, animated lumps of metal that can take loads of punishment before going down. One of the reasons why Fyodor and the others have such appreciation for my capabilities is because I can bring them down quickly. I train my crosshairs, I inhale, and then I depress the trigger. Most of the times I will hit the cockpit, or the legs, and the entire thing will come down in a heap.

I never really thought much about it. I never saw the result of what I do up close. I think I never really cared. I am a sleepwalker, after all…

Kirito got another MAV, and the third one retreated. It was time to get the loot and fall back. I moved around the hill to join my comrades. For some reason I took the path that made me to pass by the machine I brought down.

It was laying there, on its back. The cockpit was a broken mess, and my heart raced as I gathered the courage to see the results of my actions for once. Then I saw the man, standing over his wrecked ride. I realized my shot hadn’t been perfect. I had hit the cockpit at an angle, and although the controls were smashed, the pilot wasn’t hurt. A stroke of luck on his part.

I know he was glaring at me, although I couldn’t see his face because of the visor. He had survived, but I feel my prior targets weren’t as lucky.

I can see him again if I close my eyes, even now as I speak. I have been going with the flow for so long now it seems I cannot think on my own anymore. Yet, those who fight by my side rely on me.

Maybe if I vent away like this more often I may be able to think for myself again. I surely need that.

And that man… Will I see him again, in my dreams? I did not tell anyone about him surviving, and I hope his friends managed to retrieve him.

What a weird thing to think about.

I think that’ll be enough for now.

This was your past self, signing off.