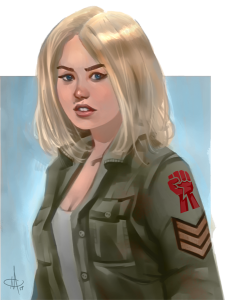 Her heart throbbed anxiously inside her chest, and her muscles tensed with apprehension. Yet, Claire felt strangely calm. There was a sense of finality to that moment. Her sister was dead, her community in danger, and she was about to find her own demise in a war she never intended to take part in.

Even if she only managed to gain a few seconds, it could be enough for Xoán to convince the miners to desist from their hopeless last stand and go hide in the mountains, where they could at least reorganize.

Truth be told, she wouldn’t be able to do much more than that. The machine she was using really wasn’t much better than the drills and shovels her colleagues were brandishing in the mines.

The simple sensors aboard Brasswolf indicated a large vehicle just a few kilometers away from her. It could only be the MAV. It was moving away from the mines, and coming right at her.

“Let’s see what I can do,” Claire muttered to herself.

She saw a plume of smoke rising from the distant MAV, and then arch into the valley. She reacted quickly, moving Brasswolf to the right, a mere instant before the missile came screaming into the ground. A massive explosion shook the mining vehicle, and a few yellow lights came alive in Claire’s control panel.

Claire had lived for years in that area. She knew the topography better than any of the soldiers sent from Earth to crush the rebellion. To her left there was a patch of uneven terrain, the slopes occasionally deep enough to hide even a MMV. Rebellious pilots would sometimes travel through them to pull all sorts of pranks. Terra was quite adept of them, albeit Claire had always preferred not to indulge in such business. Today it would be different.

As she went into those depressions, her sensors indicated that the MAV kept advancing, apparently unfazed by her tactics. It moved along a ridge that ran through most of the area. Claire saw it as soon as she cleared a small hill.

The MAV stood on a pair of reverse-joint legs. On the back there was the large volume of a screamer missile launcher, and there was a trio of battle cannons on each side of the torso. Those latter weapons came alive, lashing at Brasswolf with a hail of armor-piercing rounds.

The control panel ignited like a Christmas tree, but the MMV kept going forth, finding cover behind another hill. Inside the cockpit, Claire gritted her teeth. That wasn’t an auspicious start, but at least she had the guy’s attention.

You may win, she thought, but you won’t be getting me that easily.

In the open space beyond the hills, Claire brought Brasswolf into full throttle, and then locked the right track. The MMV skidded sideways for a short while, before she released the track and flung the massive machine up the ridge where her enemy stood.

The MAV was still turning around, offering Claire its exposed flank. That was her chance to use the two assault cannons mounted on the top of her machine. The enemy rocked as the weapons came alive in a storm of thunderous fire and exploding shells. Yet, the volley seemed to do no major damage. As her enemy ponderously turned to face her, Claire felt her heart skip a beat.

But that was no moment for hesitation. She kept accelerating, going headlong into the MAV.

The clusters of battle rifles burst in furious gunfire, rounds tearing through Brasswolf’s hull. The right drill assembly came loose, flying for a few meters before crashing into the overturned soil. Out of balance, the MMV skidded slightly to the left before Claire brought it back on track, aimed straight into her opponent.

The two machines collided with a clamorous rumble that echoed across the valley. The surviving mining drills chewed reinforced ceramic armor before spiting it away in a shower of ruined metal that reflected the cold glow of the distant Sun.

The right rifle cluster was destroyed, but the military pilot had twisted the torso in time to save his life. Swinging back, he brought the remaining three barrels to bear, and blasted away at point blank range.

The volley rocked Brasswolf to the very core, shaking Claire against her harness. She felt blood tricking down the corner of her mouth, and couldn’t really assess if it she had bitten her tongue, or if it was something worse. Desperately, she retaliated, but the MAV was already pulling away, and her drill failed to connect to the torso, instead slashing along one of the legs.

She disengaged, and circled around her enemy. Brasswolf shook unsteadily, as if it was about to fall apart. But now Claire could give a good look at her enemy.

The right side of the MAV was a wreck, with one of the guns suspended just by a few electrical cables, and thick fluid poured out of the gaping holes. Maybe Claire could capitalize on that.

She fired at the MAV with both battle rifles. Again, shells detonated against the enemy hull, to little effect. In just a few heartbeats, one of the rifles made a clanking sound and went silent.

The concern was short-lived, as the reprisal punched a few more holes into the MMV and tore the jammed gun out of the hull. A sickly clatter followed, and then Brasswolf bounced violently, coming to a sudden halt.

There was a moment of uncertainty. Had the machine finally died? But the control panel was still lit, the engine still purring. Claire looked down, outside the window panels. One of tracks had snapped. The tread was laying over the soil, just beside the half-buried front wheel.

That fight was as good as over now. Slowly, her stare returned to the enemy MAV. The military machine was also hurting, limping as it tried to get closer. Even so, it still had more than enough firepower to obliterate Brasswolf.

With stoical determination, Claire grabbed the control stick and aimed with the remaining battle rifle. As if also possessed by the same fatalistic certainty, the gun roared with an uneasy staccato. Small explosions prickled around the MAV’s torso and cockpit. Then even that weapon went silent as the feed clicked empty.

Claire released her breath. Her heart beat calmed down a notch, and she thought of the fields of Colorado, wishing she could see them one last time.

Claire blinked in surprise. It took her a couple seconds to realize what had just happened.