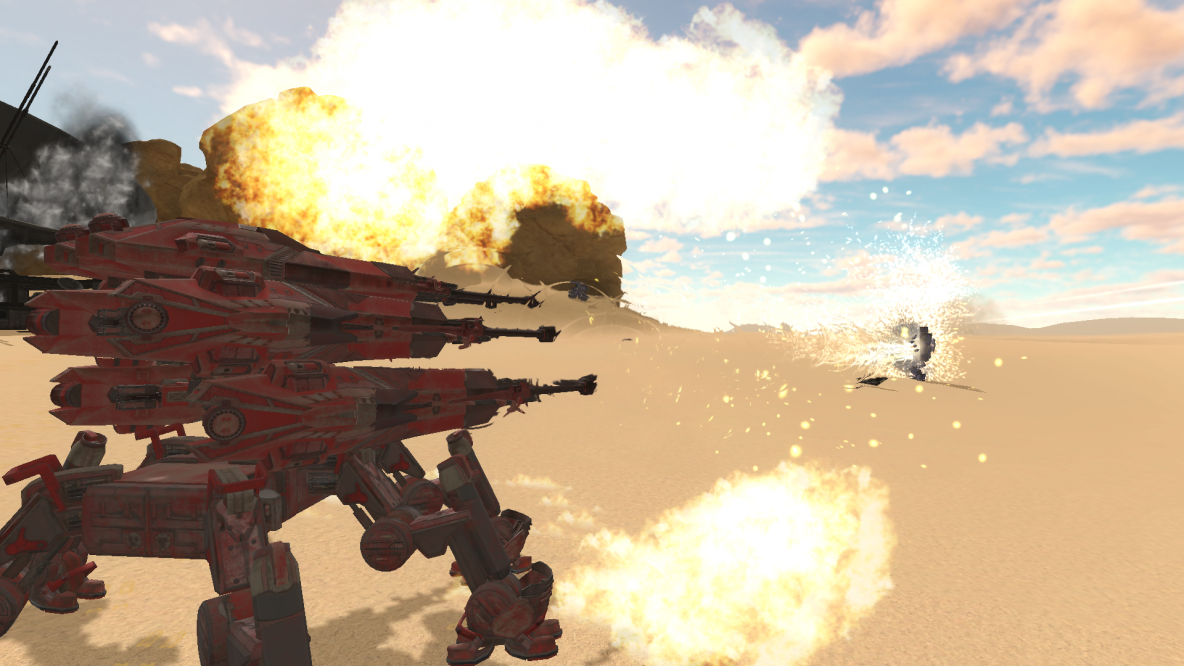 The January update has been highly focused on performance and it will not disappoint! In most cases, performance has increased by 2X but in many caes you will see more than a 10X improvement!

A lot of work went into tracking down every small performance issue and coming up with a way to solve it.

Even with all this performance, optimization, and bug bashing, I was able to make a few fun changes as well!

With all the changes I was making to the footprint system to optimize it, I added a touch of polish as well. Footprints are now properly colored depending on the material they are left on. This ensures they have the proper visibility and while can be used to track a player, they will no longer be the dead giveaway they used to be.

Trackmarks from wheeled vehicles also benefited from this change!

Turrets have received a number of improvements, first of which is they now take on the team camo pattern when deployed. In Siege mode this will either be Red or Blue, depending on your team, and in arena mode will match the colored pattern of your AI team mates. In a free for all arena match, they will deploy in a unique pattern to all other turrets and AI and it will be consistent among all your deployed turrets.

In addition to this, the turret AI has been upgraded! They now properly use the AI difficulty settings, tuned to their individual uses. Sniper turrets are insane difficulty. Armored, basic, and heavy, are all normal difficulty. Howitzer turrets are easy difficulty.

Another Kickstarter backer has redeemed their ‘Name a Part’ reward and has renamed the Z-HWY weapon to PR-UN3. A clever pun that references not only their in-game username, but the howies ability to ‘prune’ parts off of the enemy MAV’s as well!

Grenade launchers have received a bit of an adjustment as well. Looking through the stats and gameplay, it was apparent that while the grenades were very fun to use (a VERY popular weapon) they were not dealing nearly the damage to be expected from their use. Diving into some data, it seems they have a very low chance to hit with the current players (~15% accuracy through the playerbase) which made it when you did connect a shot very under whelming with the damage they do. Given the very small splash range and steep damage falloff in the range, even close hits to the ground were not having the impact players were looking for.

To account for this, all 3 grenade launcher variants were given a damage boost.

All other stats are the same other than the GL40MM MULTI also increasing in weight from 647->787.

I wanted to thank everyone for the patience in waiting for this update! This has been the largest, deepest, refactoring of the game since it was launched! All core systems were touched, including movement, projectiles, collision, physics, audio, VFX, AI, and networking. Over 730 bugs were tracked and completed during these past 2 months as well! Overall it’s a great start to the new year and a great new foundation to build more content on top of! I can’t wait to see your new gameplay videos at a silky smooth 60 FPS! Enjoy!