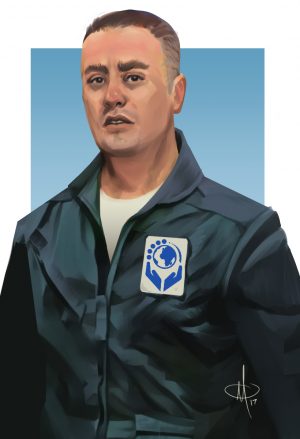 The battle was still raging. The white plumes of missiles and rockets arched across the skies, as the warheads ascended and then crashed onto their targets. The golden treads of tracer rounds cut through the air, as the shells flew straight and true. The staccato sound of gunfire and explosions echoed through the hills in a crescendo of fire and fury.

Fortunately for Vladimir Maric, the violence was still far away from him. He actually felt relieved he didn’t need to participate in the fighting directly. Yet, he still had a part to play in the wider picture, his own actions being a part of the killing, regardless of how much he abhorred it. It just wasn’t him pulling the trigger that vaporized an entire life‘s worth of memories and pain and happiness from existence.

Putting such thoughts aside, he turned his attention to the transport buggies standing nearby. While he did so, Vladimir also realigned his MMV, the four legs on which it stood moving two at a time as it rotated. The battle was expected to last for days. The rebel forces were fighting near an industrial complex under their control, so they could go back to repair and refit as much as they pleased. The same option wouldn’t be available to the attackers if he didn’t get a field base up and running really soon.

Thus, he commanded his machine to grab the parts carried on the beds of the transport buggies. He decided to start by setting up an automated gun turret, to dissuade attackers, if nothing else.

Not long ago, before the violence began, he had worked in setting up new camps for the miners. Settlements, fabricators, communication arrays, and so on. The groundworks from which would eventually rise new mining complexes and habitats.

He had been proud of doing that, of feeling he was doing something to save his true home.

Back in his native Serbia, he had heard his father talk about how those rocky peaks had looked like in decades long gone. How his ancestors would climb the forested mountains to tend to their vineyards, from which they produced the traditional red wines they had been so proud of.

It was all gone now. Pollution and the raising temperatures had dried out most of the plant life in those valleys. Agriculture was barely tenable, and there were no pastures for the cattle to feed on. Generations of work and dedication to the land, gone with the hot winds of the new era.

In their arrogance, humans had broken the world that had given them life. Now they gathered in overcrowded cities or in the dwindling crop fields, scraping for enough food to sustain themselves, or for the resources still left in that depleted Earth to make the machines they needed to survive.

Still, there was hope in the form of that frigid moon under the shadow of the largest planet in the Solar System. There they could find what they needed to fix Earth, to save those desperate people back home.

Vladimir was still assembling the mount for the twin autocannons when something on a nearby hilltop disintegrated. His momentary contemplation flickered into nothingness as he turned around at the same time the voice of one of the buggy drivers erupted through his headphones.

“Did you see that?” the driver screamed. “It seems the battle is spilling over!”

It had been a support pole for a small radio telescope, a small concession the industrial efforts in Europa had made to the scientific community. The structure that had been there to use the moon’s location to further understand the universe was cut at its middle point by a stray missile volley and shattered into a thousand tiny pieces that sprayed across the jagged hills. The large dish collapsed almost sluggishly, as if in slow motion, crashing into the ground and then rolling down the slope as it fell apart.

“This is childish,” Vladimir slurred. All of that violence, and for what? Wanton destruction? How could the rebels be so narrow-minded? In all of their talks of independence and colonists’ rights, how couldn’t they see the folks back home were having it even worse than them? At this rate there would be no humanity left to save when everything was said and done!

Criminals and naïve children, all of them.

“Vlad, there’s something coming!” the driver cried out once more.

Vladimir looked at his radar screen. There was indeed a beep indicating something was closing in at high speed. Nervously, he pointed his sensors at the incoming unit in the hopes of identifying it. As he did so, he found himself shivering.

The MAV was built around a hover platform and mounted a few, but deadly, weapons in its roughly humanoid torso. It moved swiftly, kicking a cloud of dust in its wake.

And it was getting closer.

Vladimir had already grabbed the weapons’ pack and was installing it on the turret’s body. At the same time he opened a link to the structure and started downloading the software that would make it run. Then he felt his MMV shaking around dim.

A few red lights came alive in his control panel when systems died and pieces of the industrial machine fell around it.

“He’s actually firing at me!” Vladimir couldn’t believe it. “You guys, get out of here!”

The drivers needed no more encouragement. The transports darted away, with parts falling from their beds as they moved. Giving them no more thought, Vladimir finished assembling the turret.

At that very moment a new direct hit made his machine lean to the right. Vladimir moved away from the turret and turned towards the MAV. It was surprisingly close now and he could see some battle damage over the angular hull.

The rebel MAV opened fire again, its multi-barrel assault cannons battering Vladimir’s MMV with a hailstorm of armor-piercing tungsten. His right manipulator arm flew out of the socket, crashing a good two dozen meters behind him. Vladimir readjusted his stance and responded with his single cannon, mounted over the shoulder. Although he never considered himself a good shot, he could see a few rounds landing on the frail speedster now that it had come too close.

Right afterwards a flurry of tracers trickled along the left flank of the MAV. It took Vladimir a moment to realize that was the turret coming alive.

Seeing himself suddenly outgunned and probably too far from his own allies, the rebel turned around and started to run away. Although the engineer stopped firing at that moment, the turret wasn’t as kind.

New rounds found their way into the back of the MAV, and suddenly it cracked open as the ammo stored inside detonated, making the military machine burst into fire and splintered metal.

It hadn’t been Vladimir who had pulled the trigger, but to him it was all the same. The turret was something he’d just made. He shivered inside his cockpit, sweat running down his forehead. Vladimir had come to Europa to help save the Earth, and now saw himself dragged into that hell. Around him people fought and died, abandoning those left on Earth to their own fates.