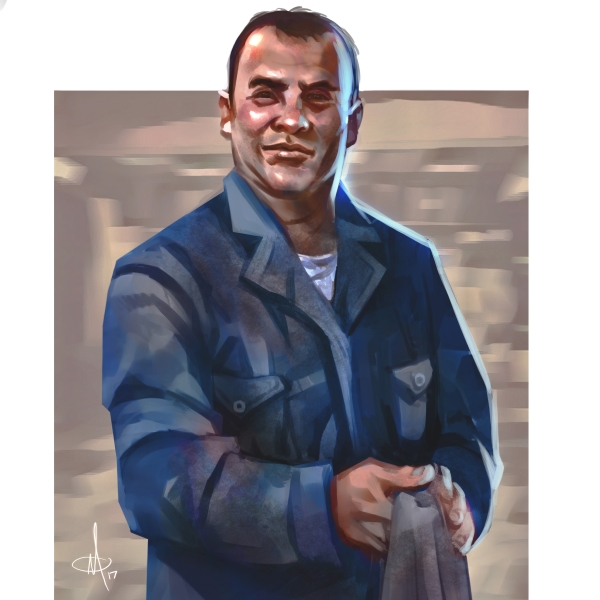 “So, he did everything to save the flower, dad?”

The boy’s words almost went over Jié’s head. Although the eyes of the miner were centered on the display in his son’s hands, his mind was drifting way beyond the cartoonish pictures bouncing under limpid blue skies.

“Are you listening, dad?”

This time the boy managed to reach through to him. Jié shook his head to focus on the here and now, and put an arm around the boy’s shoulders. The video in the display changed, and now showed a cartoonish fox running in circles around a small boy. Gently, Jié tapped the display. That story had been his favorite when he was a kid. It was a shame he got to share it with his son only now.

“Yes, Arun, he did everything he could to save his flower. Do you understand?”

The boy looked back at the moving picture. Absent-mindedly, he swiped his finger over the picture, which changed to show the cartoony child now talking with a small serpent. For a moment he stood silent, and then looked back at his father.

“Is that what you’re doing, dad? Going away because you’re worried with me and mom?”

“That’s right.” Jié nodded, proud that his son was able to grasp the situation. Then again, the boy had gone through a lot already.

After the first wave of miners had arrived at Europa and discovered just how much of a treasure trove the moon was, it was decided to greatly expand on those efforts. More miners were sent and, eventually, some even brought their families along as they realized that they would be there for the long haul. The Jovian system was to become a new home for Humanity.

Jié and his wife, Kayin, had tried to apply ever since the start of the Jovian Gold Rush, but the lack of proper skills and connections kept them out of the continuous batches of miners and colonists being sent skyward. Meanwhile, they tried to survive, working continuous shifts in the few jobs they could find in their overcrowded neighborhood of the urban sprawl of Macau-Guangzhou-Hong Kong.

Then, Kayin got pregnant. Arun was received with joy and love, in spite of his unexpected arrival; but his presence was an overburdening strain in the couple’s meager livelihood. For a few years they existed at the edge of starvation.

When the news of an available opening in the next batch of miners bound to Europa arrived in their mailbox, they barely could believe it. This was their chance. Hard as the mining work on the moon could be, it would still be way better than what they had on Earth. Arun was nine, and they had safety concerns regarding bring such a young child to space. Their handler told them space travel was safe enough for children of that age and that they wouldn’t be the first to bring their kids along. Furthermore, it was either going now, or wait, maybe forever.

Safe or not, the travel through the harrowing darkness was a living nightmare. The cramped spaces, and the poor conditions terrified Arun. It was to be the first sign that not everything was well with the colonization of Europa.

Once there, Jié was put at the controls of a MMV, almost without proper training, and told to dig for ore, mostly rare earth materials, in deep and unstable mines. Shifts would come one after the other, and he sometime spent days, even weeks, without seeing his family.

Kayin landed a job in a kindergarten, and for a few months they seemed to have found their stead, finally. But that was before the crisis began.

“Dad,” Arun whispered, “what will happen to me and mom? Will we have to go back to Earth?”

The boy shivered as he said those words. Jié embraced him tightly.

“Of course not. You will need to stay with mom and the rest of our friends. They will go to the mountains, but they won’t take you back to Earth. You won’t need to go in a spaceship ever again.”

“Okay.” The boy seemed relieved, but he could still feel the tension in his father’s voice. A short silence fell into the room, before being broken by a gentle knock at the door.

“May I come in?” asked the muffled voice of Kayin.

“I don’t know,” Jié replied, trying to sound cheerful. “Let me ask the tenant.” He glanced at Arun and grinned faintly. “What do you think, champ? Do we let your mom in?”

“I don’t know,” the boy replied, a soft smile in his face. “Only if she behaves.”

“Only if you behave, honey!” Jié told the door.

“Oh, I’ll behave.” The door slid into the wall and a tall woman, with a dark complexion and curly black hair, entered the room. She sat on the bed, beside her son, and scuffled the boy’s hair.

“What were my two men doing, huh?”

“Dad was explaining me what is going on,” the boy promptly replied. “I don’t like it.”

“No one does, my love. We’ll need to move to safer place now, all right?”

Kayin exhaled, as if trying to vent away some of the tension building up inside her. She eyed Jié.

“Ismael is restless. He says you need to go now.”

Maybe Isamael was right, but the truthfully,  Jié didn’t want to go. Yet, there was no way to help it. Not anymore. “I know…”

Whatever words were exchanged afterwards faded away from his mind in a blur of emotion. Jié would always remember how he embraced his son one last time, and how he kissed his wife. Then he exited the room. Ismael, one of his colleagues from the mines, and now apparently a speaker for the growing rebellion against the forces who exploited the colonists, was waiting in the living room.

He was a lean man, of shifty eyes and nervous gestures. When Jié found him, he was staring at a painting of a beach of white sand under a warm blue sky.

“This is wonderful,” he said, without turning to Jié.

“It’s from Kayin.” It was true. Kayin was also a gifted painter. Sadly she never got to explore that side of her talents.

“I see.” Ismael turned to face Jié. “They got hold of a couple of MAVs, Jié. Actual war machines. And they’re for us.”

“Don’t be like that. The military would never expect for us to attack them with stuff like that. This will work.”

This will work. Those words would echo inside Jié’s head many times during the next days, as he left his apartment and followed Ismael to the hangar where the MAVs were being assembled from the parts the movement had smuggled in. They would keep echoing while they traveled, and finally while they fought.

It would work… not for the movement or for the rights of the colonist, but for the family Jié loved more than his own life. They had suffered too much to be denied their first glimpse at an actual home.

They would have their piece of the universe, their castle, even if he had to die to grant them that wish.

It had to work.