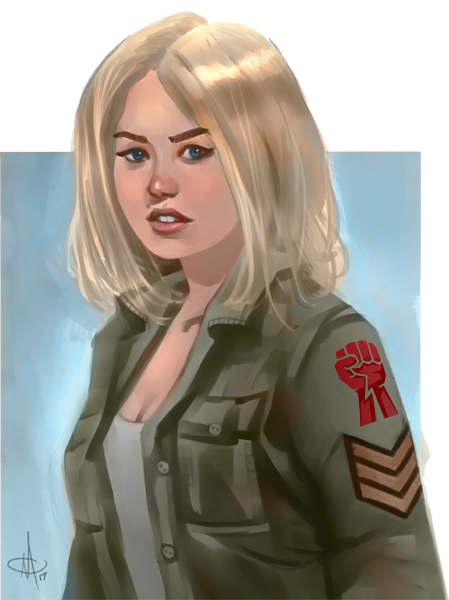 At that moment, the memory that hit her more strongly was one of emerald fields, azure skies and a warm breeze. Her parents had been farmers, growing corn in the wide plains of Colorado, their hearts and minds turn earthward while their daughters dreamt of the starry depths of space.

As they grew, though, reality settled in. The galaxy was not yet at the reach of the children of Earth, and the two girls, soon to become women, needed jobs. So, like their parents, they turned their eyes from the skies.

Then, the cataclysm that no one really expected hit Europa. Incalculable treasures were now at the reach of the ones willing to take the risk. Like many others, the Campbell sisters took to the challenge. Claire was in her early twenties when she joined the Jovian Gold Rush, fresh from college and a degree in mechatronics. Terra was even younger, just out of high school where she had done vocational training to be a miner. This was the best gig she could hope for.

The voyage through the interplanetary void was a nightmare in itself. The ship was tiny for the two thousand souls inside. During the long trip people went insane, people got sick, and people died. They should have known, but the two young sisters endured.

When they arrived on Europa, they were placed with the Zhou Mining Group, itself a labor group equipped by the Jovian Applied Mining corporation. For five years they worked for Mister Zhou, the sisters working as a team to become highly-skilled miners. Because of their skill, they were shielded from the worst of the conditions on Europa. It was difficult, but again, the sisters endured.

Then the fight began.

After taking a deep breath, Claire Campbell opened her eyes, letting those memories go. The happy times, the hardships, the successes and the disasters. Everything receded into the depths of her mind while she looked up, to the massive machine in front of her. At the same time, a tired voice, disfigured by crackling static, reached the headphones inside the helmet of her protective suit. The familiar voice of an old friend.

“Terra’s dead,” Xoán repeated, his voice weaker now. Even though there were many kilometers between them, Claire could clearly imagine him bending over, resting his head in one of his hands while trying to contain the tears. “God… She didn’t make it.”

Claire already knew that much. She didn’t need Xoán to break in the news. From the control tower of the now empty hangar she had seen the explosion. A massive cloud had ascended to the frozen skies of Europa when the hydrogen storage was destroyed. Terra had always been one for rash decisions, and she had made a point of not allowing what she had called “government lackeys” to take control of what was theirs.

“We’ve built this!” Terra had said before departing. “For five years we’ve made this valley into something more than a wasteland. They won’t take it from us, no matter how justified they think they are!”

Then she went to the storage complex, and one hour later she died. Apparently the explosion took out two governmental MAVs that had moved in the take control of the complex, but that fact gave Claire little comfort.

“I know,” she told Xoán. “I’ve heard there is another MAV coming in.”

From the other side of the line came the sound of sobbing, as the man tried to take hold of himself. Claire allowed him the time to do so. It was no secret that Xoán was deeply in love with Terra. Being himself a native from the Basque Country, where the women are said to be as wild as the mountains they live in, he had found Terra’s boundless energy and willingness to take risks absolutely captivating. Still, he was as proud as he was shy, and never found the right moment to open himself to her.

Now it was far too late.

“There is,” Xoán said after a while. “It is going directly to the main mining camp. I don’t know why it is going alone, but I bet it can’t be good. Claire, you sure you want to do this?”

Claire looked up, to the machine she had driven for a good part of her career in Europa. The Modular Mining Vehicle stood on a pair of wide caterpillar tracks. The upper structure could be described as vaguely humanoid, if one was imaginative enough, with four arm-like structures protruding from the sides, each one ending in a large drill. In the center of what passed for the machine’s chest were the trapezoidal armor plates that encased the cockpit. The dark-gray metal finish was covered in green stripes of paint that she added herself to make it look more unique. In the front of the hull was written the name of that particular MMV: Brasswolf.

Looking higher still, Claire also regarded the new additions. A pair of military-grade assault rifles had been newly mounted on the top of the machine, one over each ‘shoulder’. She was not really sure how well they would perform. It was perfectly possible that they could jam at any given time, but at least they gave her the possibility of fighting back against the loyalist machines.

Not that she really wanted to. The mere act of doing that would paint her as a criminal. But what other option was left to her? Or to her friends?

“I am,” she replied, her voice soft and calm, in spite of the anger growing inside her, and the void left by the death of her sister. “Xoán, you there?”

“I need you to do something. Go to the main mine and tell Mister Zhao to not fight against the military. Tell him to go to the secondary site along with the others, and to start negotiations with the government directly, not the troops. Got it?”

There was a short silence, as Xoán took in what she was saying.

Although no one was there see it, Claire smiled. Xoán was a good man, and she would have loved to call him her brother-in-law, had fate been more generous to them.

“Hurry up, then. I’ll gain you some time, but I cannot say how much. Maybe just a couple minutes.”

Then she started to climb the access ladders on the flanks of the machine. She knew very well what she was getting into. Although everyone had praised her piloting skills for as long as she could remember, she was still about to take a MMV against an actual MAV. No chance in hell she could survive. Still, there were people she needed to protect.

“Claire.” Xoán’s voice suddenly erupting through her headphones made Claire stop mid-way through.

“You’re one of my best friends, Claire. Take care, please.”

“I will,” she lied. She knew she would soon join her sister. Then Xoán’s voice reached her one last time.