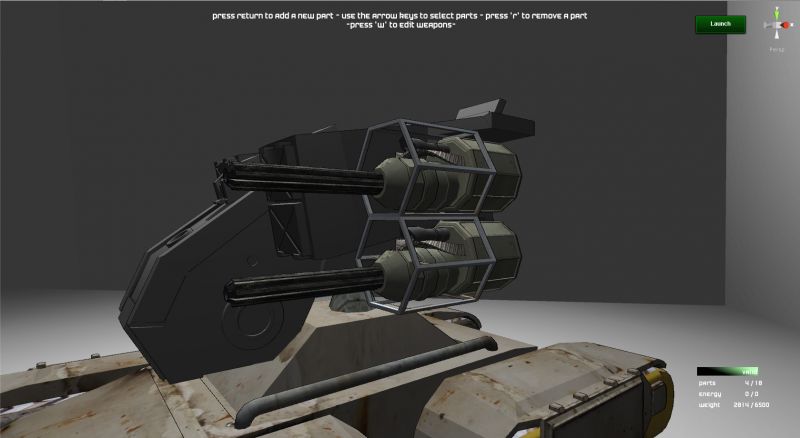 I promised some good screen shots and I am delivering. Plus….. I have added a new build of our progress! 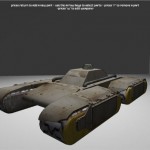 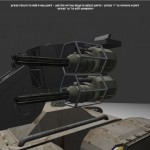 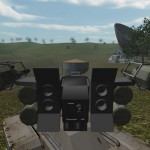 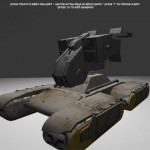 To start things off, here is the new build. To play, just download, unzip, and run the game.

There are a few known bugs right now :

Also, a new ‘undocumented’ feature. When in the MAV editor, pressing ‘g’ will generate a new MAV for you. Right now it will use random values, but there will be a UI for it coming up soon. I also does not create weapon settings yet, so remember to set them up.

As for the screen shots, these are some of the new models we put in.

First up is the Heavy Treads, a high load, high armor, leg type with limited speed. It has great turning abilities though.

Next we have the Heavy Cockpit to match with the treads. This cockpit has slots for many weapons and is great when you need massive firepower.

Last is the light machine gun. A smaller machine guns that does less damage and has less armor, but makes up for it by being light weight and fast firing. Great for harrasment fighters.

I also started on some buildings. There is a massively compley oil tank 🙂 and a communications building. Eventualy, the buildings will be modular as well (And editable!) but we needed something more then trees.

I also have some videos.

Frist up is me testing out the new F/X for when you blow up the new oil tank.

Second video is just me playing the game in the editor. I actually take out a few of the AI’s and you can see how the procedural generation works in game.

Gameplay Test from Cyberdogs7 on Vimeo.