This week I went back to work on the Stats tracking, as I felt getting some kind of ‘how well did I do”‘ was very important for making the demo more fun. Also, I put in a new camera system, so now you can actually see stuff in 3rd person mode.

Here are some screen grabs: 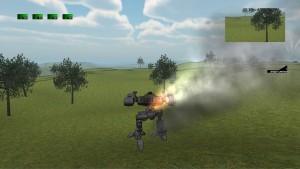 So, with the stats I am currently tracking just a handful of things that I felt would be fun to compare stats with. The way the stats framework is built, it’s very easy to add new stats to track, so I hope that being able to track many different things over the course of gameplay will be interesting to other players. I have some formatting issues currently (Time is being shown in 1/10ths of a second :/ ) but overall I have found it useful.

The new camera I think makes the 3rd person view much more useful (another complaint). The reason the camera was so close before, was to prevent mesh clipping, but I found no matter how close the camera was, clipping still happened. So I pulled the camera back and now it is an ‘active’ camera. It will move in to prevent clipping and try to ensure that the M.A.V. unit is visible at all times.

For next week, I plan to continue tracking done bugs in the M.A.V. editor. I want to add in some Ammo depot’s that act similar to the repair stations, as right now the infinite ammo really detracts from the challenge and gameplay. I also want to refocus on some AI work, so that they too will take advantage of the repair stations and ammo depots. I also want to get working ‘buddy’ AI in, so you can even the odds if you want to.