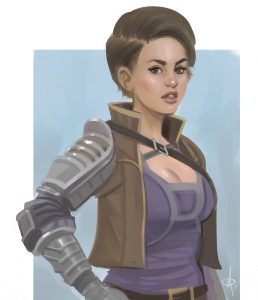 The two massive war machines clashed again, making the ground shake under their awesome power. The one with humanoid legs and a red stripe around its chest pushed the lighter vehicle backwards, but the latter drew away graciously, moving over digitigrade limbs, trying to avoid the mining spikes the rebel pilot was so adept of.

The military machine fired the assault canons at point-blank range. But the weapons were mounted too high on the wing-like appendages on the sides of the hull and failed completely, the shells disappearing in the distance.

The rebel, on the other hand, had a cluster of three machineguns on each side of the lower torso. At that range he couldn’t really miss with those weapons, and chewed away at the other MAV’s front hull. Shards of metal flew in all directions as the governmental machine staggered.

Although damaged, the oppressor wasn’t yet prepared to give up. It shuffled backwards, this time opening up with its flamethrower. A tide of white-orange napalm passed by the humanoid MAV, but seemed to do little damage.

Ferocious as the battle was, the machine with the red stripe would still win. Or at least that was the belief of the lone observer.

She raised from her crouching position and moved closer to the buggy that had taken her to that hilltop, so she could have a better view of the fields beyond the nearby colony.

“Our champion is about to deal with the raiders, in case you aren’t noticing,” Terra Campbell said to the mike built in her headset.

For a couple seconds there was silence, but then the leader of the local rebel cell replied, his voice tense. “We can see that from here. Why have you attacked them? They were about to listen to us!”

Down in the valley, the military MAV moved away from the rebel machine, sidestepping to take cover behind an ice wall. The rebel champion moved to the other side, his machineguns still pouring fire, cutting deeply into the ice before hitting the other MAV when it emerged from the other side. Now the damage spread across the battered torso and some weapon systems flew into the air.

In response, the governmental unit unleashed its rocket launchers, pounding the air around the rebel with a flurry of explosions. When the dust settled, it revealed a tattered rebel machine.

“Were they?” Terra responded to the local rebels, acting as if the clash of titans was the most natural thing in the world. “For what I know you haven’t had an operational MeeVee for weeks. Those troops could have simply walked into your town.”

“Maybe,” the voice on the other side of the line responded. “But our allies are almost here, too. And we don’t want you here, Varagians. We don’t approve of your methods.”

For a second Terra contemplated the man’s words. The Varagian Front was the only rebel cell prepared to do what needed to be done to save not only Europa, but also Humanity. Everyone else simply tried to go by, and that would never be enough.

Terra had spent her entire life struggling to grab even the faintest of opportunities. While her older sister invested in a college graduation, she decided to fight for her own independence. But no one would give her a chance. “Farm girl,” they called her.

Then the opportunity came to travel to Europa. That was her big score, her chance to truly show what she was worth. She trained hard and became really good in operating an MMV in the mines.

As time went by, more people arrived on Europa, turning the frigid moon into their new home, away from the grim despair of Earth. That was their home now, for Terra and all the others that had dared through the howling dark to get there.

Because of that she could not forgive the governments back on Earth when they started demanding more and more from them. Eventually the miners had been reduced to little more than slaves.

That was why she had been ready to die when she faced the governmental MAVs for the first time in the hydrogen storage near her town. Fortunately for her, Terra had miscalculated the angle of the explosion. The pumps she had to operate were under the ground level, a lucky stroke that protected her from the explosion.

She got stuck under the ruined installation for days, but finally someone came for her. Piloting the MMV that freed her was the man now fighting down in that valley.

The two machines kept blasting away at each other in a frenzy of fire and metal. For a moment it seemed that on one could gain the upper hand, but then the rebel machine pushed forward, overcoming the distance separating it from the other MAV. As it came closer it brought the mining spikes to bare. The added momentum carried the spikes forward, piercing through the cockpit of the governmental machine. Mortally wounded, it tripped backwards, smashing trough some pillars of rock and ice as it plunged.

The victor turned around and started moving towards Terra. Even from where she stood she could see the large gashes across the MAV’s torso and limbs, marks of the hard-fought battle.

“I assume our friends aren’t very happy with us helping them out?” the pilot asked, his voice calm in spite of what had just happened.

“Apparently they don’t want us killing oppressors without a good reason.”

“I see. Are their neighbors coming by?”

The question gave Terra some pause. Because she knew who was the champion of the freedom fighters in that region, in the same way that man in the gutted MAV was for her own people. And she felt no desire to fight her.

“It seems they are.”

“I bet Claire will be coming along too. If things get out of control I wouldn’t like to fight her. Not with a crippled MAV, anyhow.”

“We’ve already sent our message. The Varagian Front is recruiting. Also, sorry for failing to capture a MAV for you again. I guess you’ll have to wait for a better opportunity.”

Springing into action, Terra got into the buggy. It hurt a little to have to flee when she knew her sister was coming by. After being rescued, Terra had learned that Claire had managed to defeat not one but two enemy MAVs in that fateful day when she almost died. Terra felt proud, but at same time something inside told her that Claire wouldn’t approve of her new friends.

Like all the others she had gotten used to simply go by, without the drive to go that extra mile to do what truly mattered. Maybe one day she would understand.

Maybe one day the two Campbell sisters could be reunited.