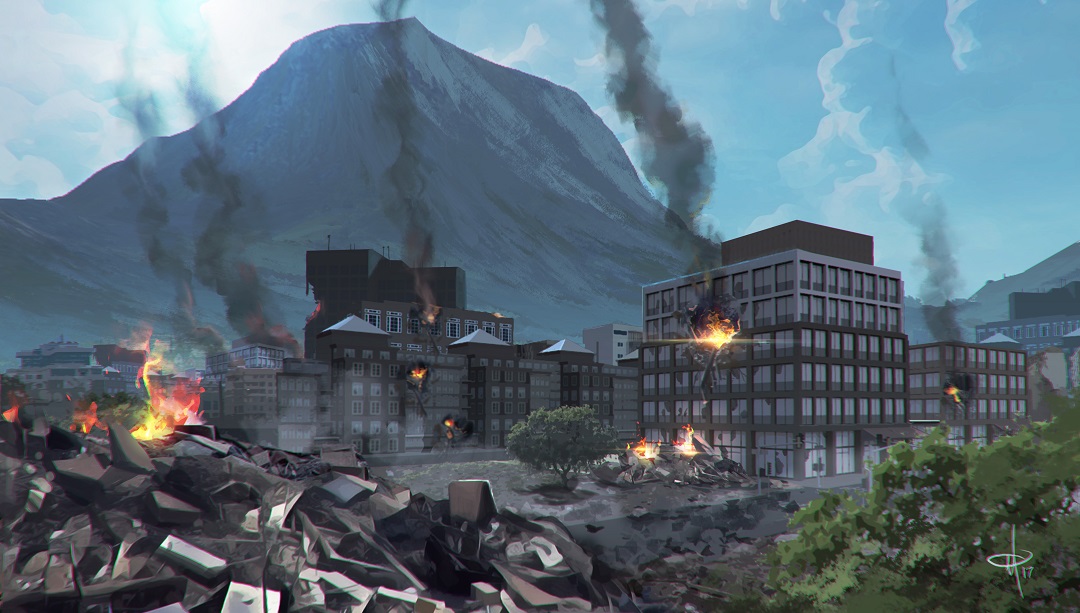 The second troop transport shattered, more than exploded, when the rounds tore through its flat flank and emerged from the other side. The innards of the vehicle flew over the scenery in a multicolored shower of armor plates, internal components, and hapless soldiers. The assailant then trained his crosshairs at the last of the eight-wheeled transports and fired a final volley, before turning around and dash away from the column, in the general direction of eastern mining camp. Chaos followed in his wake.

Although the miners of the Agenor Mining Complex knew very well there were governmental troops coming in, the mining works weren’t halted. Quite the contrary. The administrator had ordered the men to work overtime, so he could show the government they were as neutral in the ongoing conflict as he kept insisting, and surpassing their quotas, even. The outburst of violence and the general rebellion of other regions would never happen in Agenor, no sir!

The overworked miners sluggishly moved their MMVs around, almost falling asleep over the controls, paying little attention to the wheeled machine as it approached the incoming troops. Until the shells started flying, that is.

Alerted by the sudden outburst of violence, the pilots of a pair of MMVs moving along the western ridge, slightly above the valley pass, twisted their turrets to assess what was happening. One of the governmental pilots probably thought that was another vector of attack, maybe a pincer movement. He turned his avian-looking MMV towards the mining machine and unleashed his weapons.

The hapless mining machines were battered with a volley of explosive shells and armor-piercing rounds. Another unit, this one standing on four legs set in a spider-like arrangement, joined its own weapons to the salvo, shattering the MMVs apart.

The third governmental unit turned the other way, and noticed the one true assailant running away, leaving a cloud of dust in its wake. It opened one of the launchers mounted on the right side of the hull and let go a flight of unguided rockets, which arched over the battlefield, before dropping over the escaping MMV. The attacker was no beginner, though, and moved his machine from one side to the other, using the full width of the valley in that area as he maneuvered. Warheads exploded around him, but none seem to hit.

“Kenneth! You hit the three transports!” The voice materialized inside the helmet of the MMV’s pilot. For a moment he hesitated. Kenneth… Of course, that was his current alias. During the adrenaline rush of the firefight that almost slipped from his mind.

“Good!” he replied. “I’m disengaging and proceeding to the next stage.”

“Wait, you’re going towards the habitat, Kenneth. You need to go the other way!”

“No can do. They are already on me. I’ll leave this thin can on the other side of valley.”

Kenneth knew that conversation would go nowhere, and he had no time to argue anyway, so he killed the radio. It had been his ‘allies’ in the habitat who had planned that little operation. Although the administration seemed quite content with allowing the government to do what it pleased, many miners and other colonists had a wildly different opinion. Kenneth had infiltrated their ranks as soon as the rumors of a resistance started to spread, and due to his piloting skills he quickly became the only true candidate to carry out the ambush. The conspirators could modify only one MMV without attracting too much attention, so they were forced to put all of their eggs in the one unpredictable basket that was Kenneth.

The plan had originally called for Kenneth to abandon the MMV on an abandoned area of the mining complex, and then escape through the mine shaft. Of course, he did not intend to follow through with that. Instead, he would make sure the inhabitants of the valley wouldn’t ignore the ongoing conflict any longer.

Looking through the rear camera, he saw that the three MAVs were coming after him, with the one which had fired on him in the lead. Whoever that pilot was, he seemed confident he would be able to deal with him on his own.

Come on, then. The outlying structures of the habitat complex came into view when Kenneth moved around the cliff side, skidding as he made the machine turn in wide arc. Now he was surrounded by the tall structures of the northern electrical substation. The MAV coming after him followed suit. Kenneth could see it walking among the posts and smaller buildings in its strange bird-like gait, moving the weapon around, but unwilling to fire just yet.

He probably just needed some motivation.

Kenneth turned the turret of his MMV and fired his rifles once more. Rounds slashed thought the air, pricking at the top of the posts, hurling shattered metal and sparks into the air. Some rounds found their way into the enemy machine, shedding away some armor.

The other MAVs were now also entering the substation. Seeing his comrade being hit, the pilot who had attacked the miners on the other side of the valley opened fire. A flight of missiles took off from the launchers on his machine’s shoulders, flying straight into Kenneth’s MMV. This was as good of an opportunity as he would get to achieve his goal that day.

He promptly changed direction, taking cover behind a warehouse just as the missiles passed by. A few of them slammed into the building, blasting the walls and hurling orange fireballs into the cold skies. The rest went straight ahead. One exploded against a light post, four more flew right into the giant wall that was the main hub of the habitat. Several detonations shook the outer walls, and a cloud of some ascended as something inside caught fire.

Kenneth could have grinned, but he was too focused on his immediate surroundings. Emerging from behind the shattered warehouse, he reengaged the enemy. The MAVs had halted as their pilots realized what had just happened, but he would give them no pause. The rifles hit the same machine once more, shedding away some of his weapons and spacers, which fell off to the ground in a cascade of twisted metal.

The third MAV, the one that looked like a spider, unleashed a volley of unguided rockets, the pilot certainly moved by anger and a raging desire the get the man that had spurred that fiasco. But Kenneth was already moving away, hidden among the myriad of buildings encircling the habitat. Rockets fell all over the place, blasting buildings, pipelines and vehicles.

A dozen fires raged in Kenneth’s wake, casting a cloud of dust and smoke into the air, inadvertently covering his escape. By his hand, the war had now arrived at Agenor. Two options were left to the settlers: they would have to either capitulate, or resist.

The revolution had arrived.